Below you will find the critical Alapaha Blue Blood Bulldog breed information needed to decide if this is the dog for you. To be honest, most people fall in love with the striking color pattern of these pups and just go ahead and purchase them before reading anything! If you are unsure whether this pup is a good match for you, head over to our puppies for sale page and try our "Find Your Best Friend" App. It will identify the breeds that best match your living, family and activity levels.

The Alapaha Blue Blood Bulldog has a life expectancy of 12 to 15 years.

The true origin of the Alapaha Blue Blood Bulldog is unknown, but the breed is believed to have been developed from the now extinct Mountain Bulldog, Old Southern White Bulldog and Old Country Bulldog. These dogs arrived in America in the 18th century and served as companions, guardians and workers mostly in the southern part of the country.

By 1979, the Alapaha Blue Blood Bulldog was nearly extinct. Fortunately, a dedicated group of breeders were able to preserve the breed. The dog is still quite rare today, but population numbers are bouncing back as it is now bred throughout the world.

The Alapaha Blue Blood Bulldog weighs 78 to 100 pounds and measures 20 to 26 inches.

The Alapaha Blue Blood Bulldog is devoted and protective.

The Alapaha Blue Blood Bulldog is natural guardian. The pup will not instigate a fight, but will not back down from one either. This breed is bold, highly alert and likes having their loved ones in sight, where they can watch over them. When needed, the dog will act to defend their family and home.

This breed bonds closely to their family and especially adores children. They have quite a bit of tolerance and patience for children, and enjoy playing with them. The dog is happiest when treated as part of their family and makes a loving and affectionate companion.

The Alapaha Blue Blood Bulldog is very intelligent and easily trainable. It should always be treated kindly and responds well to praise and other positive reinforcement. Having said this, it does need early socialization and training. They are inherently protective and need socialization with people and other dogs to help them learn the difference between a welcome and unwelcome visitor.

In the home, the Alapaha Blue Blood Bulldog is laidback and calm. Once outside, however, this beautiful dog grows energetic and rambunctious. You will need to take the pup on a lengthy walk at least once a day, so make sure you can make the committment. 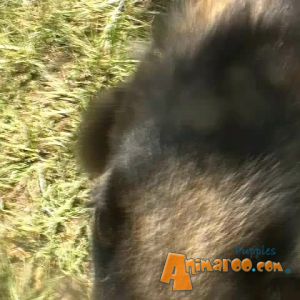