The increasing number of certified emotional support dogs flying the friendly skies has caught the attention of the some airlines and passengers. The problem is not the Goldens and Labs that really are needed for people with serious issues, but others who are abusing the system. The Air Carrier Access Act permits emotional support animals to be taken on planes and fly free of charge. They are also allowed to sit on the owner’s lap instead of having to stay in a cage under a seat.

To qualify as a support animal, the owner needs a letter from a mental health professional after a clinical assessment. The certification is valid for one year. The doctor or psychologist specifically looks for depression, post-traumatic stress disorder, or other conditions that are aided by support animals.

The appearance of support animals on planes seems to be a growing trend. JetBlue reports it anticipates more than 20,000 emotional support and service animals will fly on its aircraft this year. Airline employees are n 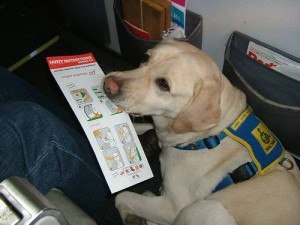 ot the only ones taking notice of the increasing presence of dogs on plans. Passengers are beginning to voice their concern as well.

Passengers concerns range from allergies to those who feel dogs, especially large dogs, are a disruption. Some flight attendants are also complaining that the animals are making their jobs more challenging.

Marcie Davis is the founder of International Assistance Dog Week. She travels regularly with her service dogs. She says, “It’s becoming a big problem. I’ve seen people bring on pets and try to pass them off as an emotional support or service dog. It’s not appropriate, and it’s not safe. Assistance dogs are trained not to bark in public, not to go smelling other dogs or people. I’ve had my dog attacked in multiple situations. Honestly, I understand that there’s some value that people need an emotional assistance dog. But I think a lot of this is that people love their dogs and think they feel like if you have your dog, why can’t I have mine?”

Gigi Griffis, who travels with her emotional support dog adds: “Shame on anybody who abuses the system. That’s why I tell people this isn’t just about getting around airline fees. If you genuinely need this animal in your life, that’s what this is about.”