Mardi Gras season in Louisiana is known for its daily parades, glittering balls, and other activities put on by social clubs or organizations called krewes. The oldest krewes date back to the late 1800s. Many krewes are extremely exclusive, and membership is by invitation only. However, others are a bit more democratic and unordinary. Krewe des Chiens puts on an annual parade to benefit shelters and animal aid organizations in and around Lafayette, Louisiana. 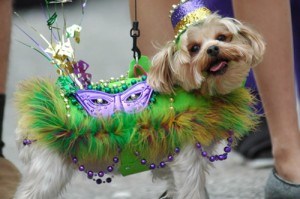 Since its inaugural parade in 1999, Krewe de Chiens has raised more than $300,000. Krewe president Allison Habetz explains, “It started as a parade for dogs that were up for adoption at the shelters, and it kind of grew into this awesome thing that it is now.”

The krewe holds three main fundraisers: the dog parade, a Mardi Gras ball for owners, and a raffle to determine which lucky dogs will be this year’s parade royalty. Parade royalty includes a king, queen, duke, and a duchess. In 2013, the Krewe de Ciens parade featured 191 dogs and raised $28,000 with a mutt being King, a beagle being Dutchess and a boxer being the Duke. This year’s goal is to have more than 200 dogs participate in the February 22 parade, which is preceded by a canine costume contest.

Habetz adds: “If you weren’t lucky enough to have your dog win one of the four primary royal positions, you can have your dog in the parade as a jester for $100.”

Behind the fun and games is a serious message. Habetz says, “We have shelters and rescue groups full of adoptable dogs because of poor population control. The mission became to raise money for spay and neuter awareness for pet overpopulation because it’s such a problem.”