Inspiration may be the mother of invention, but apparently love of your pet is not far behind. After a traffic mishap left her dog Maggie with a sprained spine and hip, automotive engineer Lyndsey Wolko set out to make car travel safer for pets. 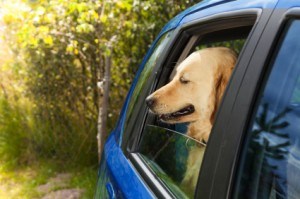 gly aware that animal safety products were by and large not tested and when used either did not work as claimed or broke. Wolko points out, due to the oversight and lack of testing in the industry, consumers’ dogs are regularly putting their dogs at risk without realizing it.

Seeing a need and an opportunity, Wolko founded her nonprofit Center for Pet Safety in Reston, VA, in July 2011. Her engineers spent two years developing crash-test dog dummies and designing safety tests through MGA Resource Corp. to conduct a thorough review of pet travel products available in stores. When the pilot results were released, Subaru stepped up to fund the rest of the study,

The results of that study were released in October 2013 and published by Consumer Reports. It included tests on dummies representing a 75-pound Golden Retriever, 45-pound Border Collie, and a 25-pound terrier mix. Only one brand, the Sleepypod Clickit Utility Harness, protected all the dummies in 30 mph crashes, reports Wolko. “This was the only brand that consistently kept the dog on the seat for every test. It prevented the launch of the dogs and prevented side-to-side and fore-and-aft rotation of the dog and helped keep the spine fairly stable.”

Wolko also notes that representatives from all the product manufacturers were invited to attend the testing and just four showed up. Michelle Krebs, a senior analyst at Edmunds.com, says Wolko’s testing is extremely timely because pet owners want to drive with their pets but acknowledges that pets that aren’t harnessed in a car are in danger of being propeled through the car like a missile in a crash.

Subaru specifically markets to pet owners. Plans have been revealed to offer the Sleepypod Clickit Utility Harness in its gear catalog.

Wolko, an associate member of the Society of Automotive Engineer, runs her center’s product research division, which is mostly manned by volunteers. Next on Wolko’s radar is lifejackets.