Patience and Positive Reinforcement Can Help Tame Your Dog’s Aggression. 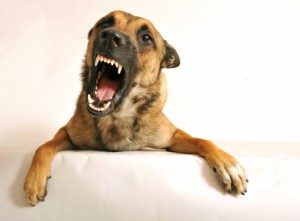 Experts say it is important to establish yourself as the alpha dog from the moment you take your dog home. This is true whether you bring home a Rottweiler puppy or a Rat Terrier puppy. It is also important to socialize your puppy early and often with other dogs, especially with other dogs of the same breed as there is anecdotal evidence dogs tend to be more aggressive with members of their own breed.

Dogs can be territorial, which can lead to chasing automobiles, lunging at people walking near their yard, or excessive barking. The more the dogs barks, the more hyper they become as if working themselves into a frenzy. Bark collars can curb barking and thunder shirts can keep dogs calmer, but neither is a great long term solution.

Sometimes aggression can be caused by pain or discomfort. If you know your dog is injured, give them plenty of space or put them in a room by themselves where they won’t be bothered. Conversely, if your dog is suddenly, uncharacteristically aggressive, have them checked out by a vet for an undiagnosed injury.

Patience and positive reinforcement are the most effective way to curb aggression for the long-term. Yelling or hitting is abuse and will only make the problem worse so don’t do it no matter how frustrated and angry you become. Signing up for behavioral training classes benefits both dogs and their owners. In addition to the dogs being in a social environment, the trainer teaches owners methods that eliminate bad behavior and encourage desired behavior. Also, don’t inadvertently promote aggressive dog behavior by playing games like tug-of-war. This game encourages power struggle between you and your dog. Finally, doing your part to help control the pet population can also effect Fido’s aggresion. Neutered and spayed dogs tend to show less territorialism and dominant behaviors.

Be Careful of What You Reinforce

Pick the Right Puppy Out of the Litter