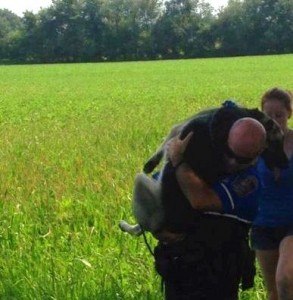 A Pennsylvania patrol officer heroically went above and beyond the call of duty to save a German Shepherd traumatized by a car accident.

On August 11, South Londonderry Township Police officer Nick Ague heard the report of a car accident on his vehicle radio and that two dogs involved in the crash had run away from the scene. Ague told ABC News, “I heard other people say they saw a German Shepherd running. Based on the location I could tell the dog was heading west.”

Along with some other officers, Ague searched for the shepherd and eventually located her. But the frightened dog ran from Ague whenever he got close. When the dog’s owner, Megan Smith, arrived on the scene, the shepherd, whose name is Mya, finally stopped running. But even when the owner called for her, Mya wouldn’t move and that’s when Ague realized she was in trouble.

“The skin on the pads of her feet was hanging, presumably because she ran two miles from the crash on hot asphalt. When I realized that’s why she couldn’t walk, the only thing I could think to do was pick her up.”

Ague draped the 75 pound shepherd over his shoulder and carried her about 100 yards, the length of a football field, to Smith’s car. A fellow officer took a picture of Ague carrying Mya and posted it on Facebook. The photo went viral and has made Officer Ague a hero.

The patrol officer, who owns a German Shepherd and described himself as “a huge animal lover” says saving Mya was never a question. “Just putting myself in the owner’s shoes, I would not want to be in that situation. I tried to right any wrong and do what I hoped someone would do for me.”

Smith says Mya’s paws are almost healed, and she is walking normally again.