A lot of challenges arise when purchasing a puppy for sale and bringing it home the first time. One of the biggest issues is dealing with a puppy barking in a crate when left alone. Most puppies will bark and whine until their owners [and neighbors] just can’t stand it any longer. This is frustrating for obvious reasons, but is something you can correct with time and patience.

It’s important to introduce your puppy to the crate in the right way. The crate should not be viewed as a place of punishment or, frankly, a cage. The crate should be your pups private place in the house. Dogs inherently enjoy smaller, confined areas because they feel protected. You just need to get your little one to feel the same way. Never put your pup in the crate as a form of punishment.

My puppy labused to bark when I put her in the crate when I was at home. According to my neighbor, she was even louder 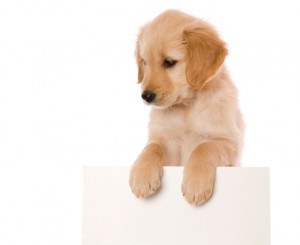 when I was gone. After trying a few different things, I found two steps in particularly really helped. The first was to put a cover over the crate. I used an old comforter. This converted the “cage” into something more like a den, which dogs naturally prefer. My pup calmed down almost immediately.

The second step was to put a dog bed in the crate as well as a few dog toys. The bed can be a hit and miss proposition given the fact it takes up so much space. Give it a try with your dog and see how they react. Regardless, the toys give them something to play with while in the crate if they have a bit of energy.

These two steps took care of about 90 percent of the problem for me. I even came home a week after making the changes and found my pup sleeping deeply. That was a relief!

Don’t just wake up and put your pup in the crate before leaving for work. Wake up a bit earlier and take them for a walk. This will help them burn off a bit of energy. It also gives the puppy a chance to pee, while the exercise will stimulate any number 2 actions the pup needs. If you don’t take this step, the puppy will be energetic in the crate and inevitably use the bathroom in it. Would you want to lie in your own filth? I would probably whine as well!

Giving in to Cries

It’s important not to give in when a dog is barking inside of his crate. Yes, I realize they are adorable and it is hard to show any backbone, but you must. If you do not, the puppy will start to believe the way to get out of the crate is to bark at you. That is the last thing you want because they will do it the rest of their lives.

If you have a daily function that requires the pup to go into the crate, try to do it at the same time each day. This will establish a routine for your puppy. While the fur ball might complain now, in a month or so he will be ready to go when the magic hour rolls around.

When the puppy is not required to stay in the crate, go ahead and leave the door open. Why? Remember, we want it to be your dogs private space. Slowly, but surely, most will associate it as such and start to voluntarily go into the crate to relax when they are tired or want to take a nap. Once this type of conduct occurs, you are home free.

Don’t punish a puppy for crying in the crate. They will associate the crate as a place to be scared and punished. Instead, just ignore the puppy. If they cry and you don’t react, they will soon realize crying doesn’t get what they want and will stop. If you react to the cries, they will associate it as a command for you and do it the rest of their life whenever they need something.

A puppy barking in crate when left alone can be annoying and it can also be sad. The one thing you have to realize is that this will stop eventually. If you can stick with it and incorporate the tips in this article, you should soon have a well adjusted puppy.

If you have any questions, just let me know in the comment section below.

Patience and Positive Reinforcement Can Help Tame Your Dog’s Aggression.