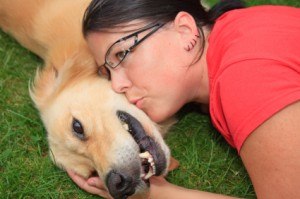 People who call their pets their kids (fur babies, four legged family member… etc) are often viewed as either overly lonely, eccentric, or possibly delusional. However, recent research suggests the emotional bond dogs and their owners are a lot closer to that of parent and child than previously thought. I’m certainly attached to my Golden as she is to me!

The first thing to understand is that the bond is a two-way street. It’s not just the humans that were invested. Dogs have been truly domesticated for approximately 15,000 years and are so integrated with people that the owner is often a dog’s primary social partner. This prompted researchers to investigate the so-called secure base effect, a key element in parent/child bonding, in relation to dog owners and their pets.

The secure base effect is when human infants use their caregivers as a secure base when it comes to interacting with their surrounding environment. Researchers in Vienna looked at dogs’ reactions during three circumstances: when their owner was absent, silent, and encouraging. In the experiment the dogs could earn a food reward by manipulating dog toys.

The animals appeared significantly less keen on working for food when their caregivers were not present than when they were, but an owner’s encouragement or silence had little influence on the animal’s motivation. Next, Dr. Horn and her colleagues used a stranger instead of the owner. In that case, the dogs hardly interacted with the strangers. They were not much more interested in trying to get the food reward than when they were alone. They were only more motivated when their owner was present.

The researchers concluded that the owner’s presence is important for the animal to act confidently.

Dr. Lisa Horn from the Vetmeduni’s Messerli Research Institute at Vienna’s University of Veterinary Medicine, believes the study provides evidence for the similarity in the secure base effect between dog/owner and child/caregiver relationships. The amazing new parallel observed will be further investigated in direct comparative studies on dogs and children. What was really surprising was that adult dogs behave towards their caregivers like human children do.