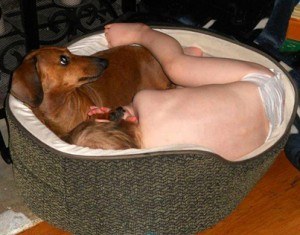 What do toddlers prefer – a cute Tabby kitten or an adorable Dachshund puppy? I’ll give you a hint. Take a look at the image!

A new study has found that by the time a child is three years old, they are much more attracted to and engaged by dogs. Cats? Not so much. The researchers stated the obvious when they noted cats choose to ignore their owners.

The study’s co-author Marta Borgi of the Istituto Superiore di Sanita in Italy reports, “Children in our study preferred dogs over cats in every comparison, and regardless of their familiarity with this species. The appreciation of less-popular animals like cats probably needs time to develop, and appears more dependent on their physical appeal and on our contacts with them.”

The study presented 272 children, aged three to six, with paired images, such as a human adult and baby or a dog and a cat. Generally, the kids showed preference to dogs over cats. However, children who had cats as pets at home favored cats more. There was no such distinction when it came to dogs.

In cat versus cat pairings, toddlers preferred those cats with baby-like features. Older children did not show the same trend.

According to the researchers, the results suggest children learn to appreciate less popular companion animals, such as cats, through familiarity and maturity. It also helps if the animal has babyish characteristics. Girls were more likely to prefer a dog with babyish traits than boys, but not to the extent as was seen with cats.

Borgo adds: “In species whose young completely depend on their caregivers for sustenance and protection, (this) response has a clear adaptive value, contributing to enhance offspring chances of survival. What is interesting for us is the possibility that such a response may be generalized to the human-animal bond.”

Borgi says the study provides important information on how best to select companion animals for children, especially those who may have social or cognitive disorders such as autism.