Dog vs. Vacuum - An Epic Battle

It has long been suggested the greatest enemy of the canine kingdom is no less than Felis Catus – the cat. While a credible enemy, peace has broken out in certain residential kingdoms between these two protagonists. This is more than can be said for the greater evil found in the lands known as ye average household where every pup is aware of "it that must not be named": 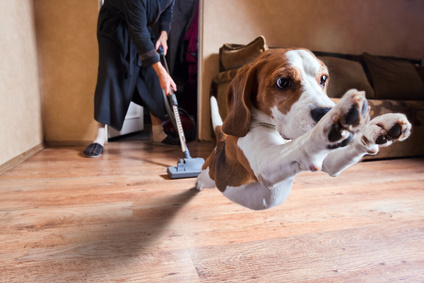 The vacuum.
Thy Beginning of Evil
The threat known as thy vacuum was not always so. In long ago times, dogs happily frolicked about their domains in peace and tranquility. Oh, there were periods of terrorism in the realm such as when a new human baby was introduced to poke, prod and crawl upon thy innocent dogs, but all knew such terror would pass quickly.
No, it was not unto the year of 18 and 60 when the evil wizard known as Daniel Hess of the forsaken kingdom of West Union, Iowa, first brought to life the unspeakable threat when he turned a mere stick into a raging beast known as the first of the vacuums. In truth, Wizard Hess' first creation of the damned was little known to the brothers and sisters of the dog lands. Though fierce, Wizard Hess lacked the biscuits required to make more than a few of his evil creation.
And the dogs were not afraid, so says Gandog, Aussie Master of the Frisbee.
Alas, evil knows no bounds. In 1898, the dark wizard John S. Thurman of St. Louis, Missouri, a land traditionally known for the spreading of misery in the form of thin, bland adult beverages, brought the vacuum to its current evil standard. Wizard Thurman invented the pneumatic carpet renovator powered by an unholy spirit known as "gas."
Roar and consume did this new form of that which may not be named. From stored bits of hidden treats in the carpet to the hair of thy dog, this evil incarnate showed no mercy. All were consumed in its hungry maws as it inflated to not even take a single breath as it sucked up all before it with glee and a malevolent light shining down upon all who are unfortunate enough to be in its path.
And the dogs were afraid, so says Gandog, Master of the Couch when his humans are not home.
The Walking Dread
Lo this war has raged for over 113 years. Lo has many of the enemy been vanquished although at the cost of many a canine warrior.
The accepted attack is a life commitment. That evil which must not be named does not submit to the fiercest of bites, be it from thy proud Lhasa Apso or thy mighty Rottweiler brethren.
No.  The battle against thy evil is one of many years. The only proven strategy for defeating such a source is a fierce attack of vocal assault. This assault may only be used when the consummate evil chooses to show itself. Then and only then must thy canine brother or sister attack with barking so deep it comes from the soul.
The battles are long.
The battles are loud.
Thy dog will by afraid, but must persevere.
If so, victory will be yours. It may take years, but victory will be had by a dog of stout barking and strong soul.
So say Gandog, Master of the Counter Top when thy humans are not home.
Evil Does Not Die
Alas, this war shows no end for thy Wizard Thurman was crafty and clever when perfecting his beast. You see, for upon the victory of each dog and death of each vacuum, the vanquished enemy spawns an eviler version of itself. We know not how. We do know, however, that in every single case in recorded history, the death of a vacuum is followed by the presence of a new and even deadlier vacuum typically within two cycles of the sun.
Thus does the war go on and on.
Thus must we, the dogs, defend thy world from the threat.
Damn you Wizards Hess and Thurman for bringing such a fate upon us!
So says Gandog, Master of Slipping Out of His Collar when an attractive Poodle walks by on a walk.
So says we all.
Bark.
The Human Perspective
All kidding aside, we all know dogs are deathly afraid of the household vacuum. It doesn't matter if we are talking about a tiny Teddy Bear puppy dog or a big Newfoundland. This is hardly a surprise given the unholy racket most vacuums make while sucking up everything in their path. It is important to familiarize your dog with the vacuum so they realize it is not, indeed, some beast trying to get them.
In this video, we take a look at how the Cesar Millan, the Master of Pups, suggests this be done.