One very popular breed of dog in the United States is the Miniature Boxer. Now, this is a dog that is popular for a lot of different reasons. However, one of the main reasons why it is so loved is because of its charming looks and personality. Some people misunderstand the boxer, and think that it's a bad dog. Of course, the only way that this dog can be bad is if that is the way that it is raised. These dogs can be kind of intimating to look at, at first. After you get to know the dog, you will find out that they are really just sweet dogs. Before we get into the personality of the Miniature Boxer, we need to talk about the look of Miniature Boxers. After all, these dogs have a very different look to them.

YThis dog is popular because of its medium size. Whenever you see it, you will notice that it's not as big as normal boxers (hence the miniature in their name). At the same time, they are not as small as other miniature dogs. They do have a very square jaw, which is natural for boxers. They also have kind of floppy ears, which just adds to their charm. These are traits that you can even notice on Miniature Boxer puppies as well. They do have a very classic under bite that can cause problems later on in their life. However, there is not much that you can do about it, because Boxers are just born that way.  Besides that, they have very muscular legs and deep chests. They are very powerful dogs and can be a handful at times. Their deep chest does help them have a very deep bark. When they bark, it's hard to imagine a sound that deep coming out of a small animal.

Although some people think differently, Miniature Boxers are great to have around kids. They are very easy going and very gentle with kids. Not only that, but Miniature Boxers are also very good for dog training. This is good, because you should not have a problem getting this dog to listen to you. However, on that same note, some Miniature Boxers can be strong willed. They will normally listen to you, but at times, they can get started doing their own thing, and it's hard to stop them. This is a trait that can be seen in Miniature Boxer puppies when they are first born. However, if you train them right, they will grow out of it!

One thing that Miniature Boxers use to be good at, back in the day, was running down animals that would come into their yard, and hold them down until their master arrived to kill the animal. Most people do not use Miniature Boxers for this reason anymore, but it can still be in their nature. Although they are very sweet, they do not like other animals to come into their yard. You can overcome this by getting them around other animals early on in their life. 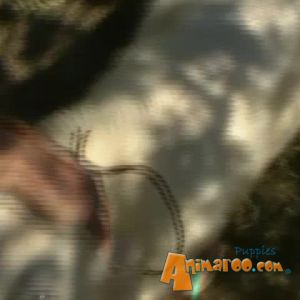