If you're a dog owner, then you probably know dogs are some of the most intelligent animals on the planet. They can learn simple commands you and I can come up with or sniff out bombs and drugs as part of security issues. Having said this, some breeds are smarter than others. In this article, we take a look at the German Shepherd intelligence ranking.

German Shepherds are smarter than you average dog. In fact, they are considered to be the third most intelligent breed. The first two? The Border Collie comes in first place followed by the Poodle. 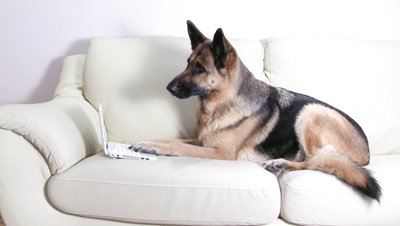 Why are German Shepherds considered to be so smart? The simple answer is genetics. The breed is believed to have been very intelligent to begin with, the luck of the draw if you will. Over the years, however, breeding techniques were used to emphasize and enhance the problem solving and learning ability of the dog. This breed is now so advanced intellectually that you see it commonly used in security and police efforts.

While German Shepherds are used extensively in security matters, they are also the dog of choice in other areas for another reason. Unlike Border Collies and Poodles, these dogs have a nice combination of good size and temperament. Border Collies can be excessively hyper and Poodles can be downright mean, which makes both a bit difficult to use in high stress situations.

What are some examples of intelligent conduct by Shepherds? How about:

Should You Get One?

If you are considering getting a German Shepherd, you really could do worse. This is a very smart dog that is also very family friendly. Generally speaking, these pups have a great temperament, which makes them an even better choice.

Are there any drawbacks? Unfortunately, the answer is yes. Pure bred German Shepherds are infamous for having hip problems. They suffer from arthritis, which is usually caused by dysplasia. Dysplasia is the abnormal growth of the hips that causes the joints to be either tight or loose. It is believed 1 in 5 adults suffer from the problem, which is painful and limits their activity level. While the condition can be treated medically, it is truly sad to watch an otherwise great pup slowly degrade.

If intelligence is a major factor in your search for a dog, the German Shepherd definitely meets your needs. Throw in a great temperament and these can be wonderful pets.