Life was good for Brendan. He was married, had children, a good career as a physiotherapist, and was moving to Arizona to start a new job. While walking through Heathrow Airport in London, Brendan slipped on a wet floor, hit his head against the floor, and lost his eyesight.

Even though he was able to continue working and was able to get around using his white cane, he was plagued by deep depressions. His relationships with friends and family suffered, and he felt no joy. His wife suggested Brendan get a guide dog. After their first application was turned down, they contacted Guide Dogs of the Desert (GDD) in Palm Springs, California. The group accepted his application and in April of 2013, Brendan started a 28 day required residency so he could meet and bond with his new dog, a chocolate lab named Abe that had spent the previous eight months in training.

It was not love at first sight. Brendan found it difficult to trust Abe, so he was resistant to rely on the dog’s skills—until the day Abe saved his life. They were out walking when the lab stopped suddenly and wouldn’t move, ignoring Brendan’s command to keep going. Nor would Abe let Brendan move forward. A moment later Brendan heard and felt a car zoom past in front of them. 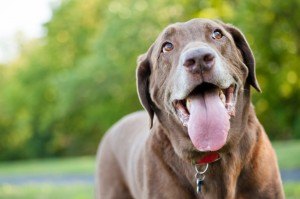 Brendan eventually realized that Abe has stopped them from crossing an alley because it saw the speeding car coming their way.

The walls Brendan had built since his accident came tumbling down. Crying, he knelt beside his dog and hugged him. Abe licked his face, and that was the start of their true bonding.

On their graduation day from the training, Brendan thanked the volunteer family that had raised Abe from the time he was a puppy. “You gave me my life back, my family back, myself back.”