Thinking of going to a pet shop to look for a Teddy Bear or  Shih Tzu puppy this weekend in San Diego? You might think twice. The San Diego City Council has banned the retail sale of puppies and other companion animals. The new law, which was passed in July, makes it illegal for pet shops and other retail pet businesses to display, sell, or give away animals such as dogs, cats, and rabbits unless an animal shelter, an animal-control agency, humane society, or nonprofit rescue organization supplies the would-be pets. 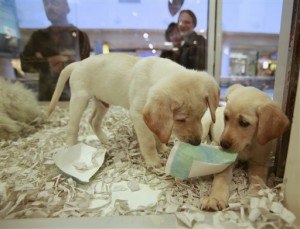 The ordinance follows bans already implemented in Los Angeles, Albuquerque, Austin, and dozens of other municipalities across the United States. The bans, applauded by animal rights activists, are designed to eradicate puppy mills, defined as high-volume commercial dog breeders. But breeders and pet-shop owners says the laws are extreme and unfair.

“It’s absolutely absurd,” said David Salinas, owner of the pet shop San Diego Puppy. “It’s the result of an animal-rights-extremist type movement. Nothing we’re doing is illegal. We’re not Communist Russia. Americans should have a right to choose where they can shop. These folks [ASPCA] believe that breeding is wrong and that you should only adopt. The sad thing is it can lead to purebred-puppy extinction.”

Cori Menkin, ASPCA’s senior director of the Puppy Mills Campaign strongly disagrees. “That’s an agenda that is attributed to us over and over again, and it’s simply untrue. We’re not against breeding. We simply want it done responsibly. We’re talking about an industry that, across the board, is extremely cruel.”
The ASPCA’s definition of a responsible dog breeder is one who deals directly with the buyer. By that standard, pet shops are unacceptable middle-men.

But even a compromise where retail pet sellers agree to sell dogs supplied only from responsible breeders has not been embraced by the ASPCA because, as Menkin adds, “As a breeder, you’re giving up the opportunity to screen where the puppy is going, to make sure it’s going to a good home.”