Most dog owners would emphatically agree that dogs feel love regardless of whether they own a small Teddy Bear dog or a large Rottweiler. But scientists rarely accept anecdotal evidence or gut feelings as verifiable proof. But recent research appears to validate what dog owners say is obvious: dogs do indeed love.

Neuroscientist Gregory Burns of Emory University has spent two years studying MRI scans of dogs’ brains to identify what our dogs think of us. According to his findings, which Burns first made public in the New York Time 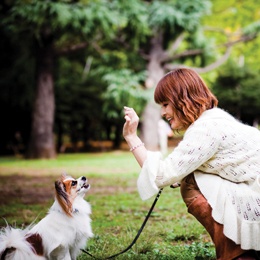 s, the area of the brain called the caudate nucleus reacts (lights up) when dogs see their owners after a brief separation. The caudate nucleus also becomes activated when humans feel love. Could that mean dogs experience the same love emotions as humans?

Burns observed, “The ability to experience positive emotions, like love and attachment, would mean that dogs have a level of sentience comparable to that of a human child. And this ability suggests a rethinking of how we treat dogs.”

A ground breaking scientist, Burns is the first to use MRI scans of dog’s brains. The use of an MRI in dogs was previously avoided due to the level of training needed to have dogs willingly put their heads into an MRI machine. Burns was able to train 12 dogs to participate.

One in the MRI machine, the dogs were shown various stimuli and recorded their brains’ reactions. When the dogs’ person came into view, their brains lit up. This was interpreted as a reflection of an apparent surge of love or affection.

One of the repercussions of Burns’ study could be a reevaluation in training methods and the adoption of new ways that take a dog’s emotions more into account. This would mean a move toward positive training and eliminating punitive training—just as most child development experts stress positive reinforcement rather than corporal punishment in teaching young children.

The study is likely to lead to more than just the conclusion of positive reinforcement effectiveness. Burns’ new use of MRI during testing may help scientists map what positive training methods promote the most efficient training.

An Alternative to Banning Pet Stores

There’s more to training than housebreaking