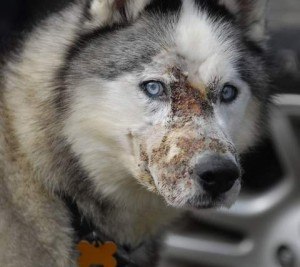 An effort to establish the United State’s first animal abuser registry in Michigan has been derailed over cost and enforcement concerns. Known as Logan’s Law, the legislation is named after a Siberian Husky that died after an unknown assailant poured acid on his face. At the time, Logan was inside a backyard kennel near Port Huron. His owner, Matt Falk, says his efforts in Michigan are spurring others to push for similar measures in their home states.

Falk notes, “There’s a lot of connection between animal abuse and human abuse. I’d like to see these bills passed not only for the safety of animals but for the further safety of our human friends.”

The animal abuse registry is patterned after one established for sex offenders. Critics of the proposed law include state police officials worried about the expense of maintaining the database. Some dog breeders have also voiced opposition.

Undeterred, legislators in the Michigan State House and Senate are pursuing a Plan B, where anyone wanting to adopt a pet must have a background check. Sen. Rick Jones, who chairs the Senate Judiciary Committee, suggests animal shelters be allowed to use the Michigan State Police’s Internet Criminal History Access Tool, or ICHAT, to check if people wanting to adopt a pet have a past history in Michigan of abusing or neglecting an animal.

Senator Jones adds: “Why not simply make this a free service for most of these organizations who have very little money, go month to month sometimes struggling to keep their doors open, and allow them to do a criminal check before they adopt out an animal? We want to try to stop that. No more victims being adopted out. Would I like it to be in law that no breeder or pet store would sell animals to someone who had been convicted? Absolutely. But we’re looking for something we can get passed, and I think this is a good step.”