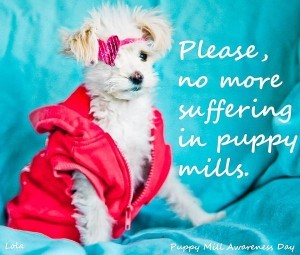 To honor the memory of her much-loved rescue named Lola, Sandra Rouse is working to end puppy mills.

Lola was born in a puppy mill and suffered from multiple birth defects including a tail that needed to be amputated. She was also missing an eye. Deemed unsellable, she was taken in by the National Mill Dog Rescue (NMDR) when she was just seven weeks old and placed in foster care, where she developed pneumonia.

Rouse, a volunteer photographer for NMDR, adopted Lola, who was welcomed into the family by Rouse’s other dog, Luka. Rouse nursed Lola to health through her pneumonia and the little dog’s personality prompted Rouse to dub her Lola the Showgirl. Rouse fitted her with a jaunty pink eye patch. Rouse also started a Facebook page for Lola as a way to educate people about puppy mills.

Four months later, Lola started suffering seizures and she was diagnosed with genetic brain disorder, the result of over-breeding. The prognosis was grim –  she only had months to live. But what a two months Rouse gave her puppy, letting her experience as many good things in life as she could.

On April 15, after a night of seizures, Lola died in Rouse’s arms.

Rouse has since founded Lola’s Legacy and reports that the late puppy’s many Facebook fans donated enough money to pay for a rescue run at puppy mills in July. “That rescue brought 86 dogs to freedom. And during intake, when they discarded their puppy mill number for a real name, all the dogs on that rescue were given a name that started with an L.”

Rouse is asking Lola fans and other touched by her short life to write their representatives on October 1, 2013, urging an end to puppy mills.

And use pink paper in memory of Lola the Showgirl.