Readjusting to civilian life can be hard for many military veterans. But the unconditional lovalty and trained skills of a service dog can be the bridge to reclaiming their lives. Former Army sergeant Chris Maddeford says his Labrador companion AJ, whom he’s had since 2009, has been an emotional support as well as a practical one.

“When I came home, I had all these injuries from the war. I had a really hard time adjusting, really hard time fitting back in. I didn’t feel normal. I didn’t really have a purpose or any hope. And it wasn’t until I got AJ that it kind of brought me out, basically back into society.” 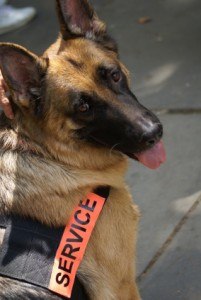 Maddeford, 31, was injured after an improvised explosive device (IED) in blew up while he was on tour in Afghanistan. In addition to a brain injury, he’s endured several surgeries on his back and hip and also experienced post-traumatic stress disorder.

But AJ reminds him of what is good in life. “AJ’s with me now, everywhere I go. AJ’s really made an impact in my life – the ability now where I’m basically able to live somewhat of a normal life. He keeps me walking straight…I had back surgery, so I drop things sometimes and he can pick it up. He turns on lights, he can open doors, push buttons. He basically is smarter than most humans. But the main thing is I have a lot of falls, and if I fall, he speaks on command. If I fall and no one is around, he’ll go outside and he’ll speak on command until someone comes.”

AJ came into Maddeford’s life thanks to the National Education for Assistance Dog Services’ Canines for Combat Veterans program. Since 2006, the initiative has placed more than 55 dogs with veterans. The organization also provides service dogs for the deaf, those with autism, and those with various physical disabilities.

Spokeswoman Lisa Brown reports that it costs approximately $25,000 to purchase, raise and train the dogs. “But for veterans, we provide them free of charge, considering they’ve given so much of themselves and their lives. It’s sort of the least we can do to give back.”

New Book – How to Speak Dog