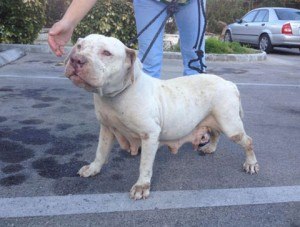 A community is banding together to demand better regulations for unscrupulous backyard breeders. The issue came to light after the story broke in Grand Cayman about an American Pit Bull named Bella used to produce up to 100 puppies. The potential street value of the puppies could be as high as $100,000.

Although debated, international guidelines note that a single female dog should not be bred more than four times given the health risks and should definitely not be bred after six years of age. It is estimated Bella is around 12 years old.

Once she could no longer breed, Bella’s owners abandoned her on one of the island’s beaches. When found, the dog’s condition reflected her inhumane treatment. She’s blind in one eye, has heartworms, and has numerous tumors. Authorities doubt Bella was ever given regular veterinary care. Unfortunately, while immoral, her owner’s actions are not illegal in the Cayman Islands, where there are no applicable laws on the books that protect dogs from being exploited.

Cayman Animal Rescue Enthusiasts member Lesley Agostinelli says “This activity needs to be treated as a professional business. If breeders had to register their business, obtain trade and business licenses, entertain health and safety inspections and provide proper medical care, we anticipate that would bring an end to the atrocities of backyard breeding and the negative impact on our communities from the over-population issues that arise from this activity.”

Brenda Bush of Island Veterinary Services who examined Bella also called for regulations. “[Bella] is the epitome of what is wrong with the unlicensed, unregulated breeding. A lot of dogs, especially purebreds, are pushed to breed beyond what is safe for them because the owner can sell the pups and make good money. In this case, there has been no reciprocation. None of that money has been spent on medical care.”

In addition to laws, activists want routine inspections of breeders.

Bush adds: “You are not selling inanimate objects. This is a living breathing individual.”

Animaroo supports the passage of new laws in the Caymens to stop situations like Bella’s from happening.