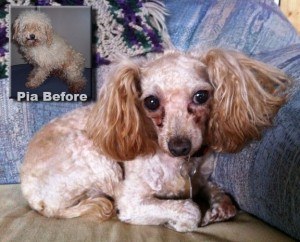 Sometimes it really does take a village.

After an Amish puppy mill owner located in Southern Illinois closed her business, rescue groups collaborated to retrieve the poodle puppies, which were kept in cinder block enclosures. The dogs were first cared for by a local groomer who bathed, brushed, and trimmed them. The Puppy Mill Project arranged the rescue and contacted the Little Traverse Bay Humane Society, which in turn took all seven dogs. Pilots N Paws agreed to relocate the dogs to Michigan and the Bissell Pet Foundation agreed to pay the puppies’ combined $2000 vet bills.

Janie Jenkins from the Puppy Mill Project recalls, “When the seven dogs came in, they were so scared they just shook. They huddled in packs and would move around the yard almost like a swarm of bees. The longer they were there, the braver they became, and they started to explore a bit more, spinning off from the group.”

Marilyn Spenard, who adopted one of the puppies she named Pia, says animals who suffered in puppy mill conditions face a transition. “Whenever I get a new dog, I leave an open crate for a sanctuary. Pia was so scared because she’d not had human contact in the mill.”

It is estimated Pia spent as long as eight years at the puppy mill so the key, says Spenard, is patience. “Little by little, she started to come out and be a little bit nosy. When she’s startled or afraid, she still goes back in there…it’s her safe place. When there’s a lot of barking or noises she will retreat there or another quiet room in the house. She had no socialization and Pia is still very skittish. She may always be that way.”

But at least Pia now knows what it’s like to be loved and cared for so she can enjoy her new life away from the inhumane conditions at the puppy mill.

learning to live,puppy mill,rescue
By Puppy Enthusiast No Comments
Share: