Why does your teddy bear puppy turn around and around before relieving itself? In fact, why do all dogs seem to do the circular tango before going to the bathroom? Answers that have been given in the past have ranged from the need to trample down the grass to surveying the area for danger. We may finally have an answer.

A new study published in the Frontiers in Zoology journal claims the real reason is that your pooch is trying to align with the Earth’s magnetic field. According to one study, dogs preferred to eliminate wastes when their body was aligned along the north-south axis under calm magnetic field conditions. The directional beha 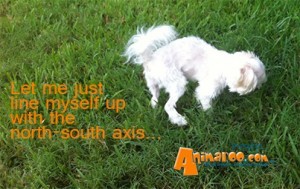 vior was absent under unstable magnetic conditions. The report states the Earth’s magnetic field is “calm” for only about 20 percent of the daytime.

The findings of this study were discovered by extensive research. Researchers analyzed the bathroom habits of 70 dogs from 37 different breeds over a two-year span. The directional orientation of the dogs during defecation was cataloged 1,893 times and during urination 5,582 times.

Researchers ruled out sunlight as a factor. The argument that dogs turn their backs to the sun during such a vulnerable act to keep the sunlight out of their eyes is not plausible. Because urine marking is a quick act there would be no need for the dog to take those protective measures.

However, the researchers could not rule out if there was some sensory effect the magnetic field had on the dogs that led them to the north-south alignment. According to their analysis, dogs not only prefer to align north-south, but at the same time they also avoid east-west directional alignment.

This is not the first time researchers have investigated the effect of the magnetic field on animals; quite a lot of study has been focused on bird and other migratory animals. But nothing concrete has proven to date.

axis,circling,Dog,elmination,magnetic field,north,north-south,outside,potty,sniffing,south,threats,why does my dog
By Puppy Enthusiast No Comments
Share: