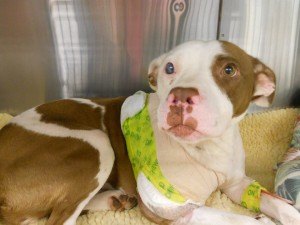 Lefty, the courageous pit bull that was shot trying to protect her family during an armed home robbery in Accomack County, VA, is back home and expected to fully recover from her injuries, which included having a leg amputated.

On July 23 four robbers broke into Lefty’s home and when one of the intruders pointed a shotgun at her owner, she lunged at the thief and took a bullet in her shoulder, preventing the homeowner from getting shot.

Dr. Michele Leatherbury, owner of Atlantic Animal Hospital that cared for Lefty and posted her story on the clinic’s Facebook page, said the impact of the blast shattered Lefty’s shoulder and tore off the soft tissue from one of her front legs, which ultimately needed to be removed.

When news of Lefty’s heroism went viral donations poured in. “I was just amazed at how many people responded,” Leatherbury said. “It was incredible.” The vet reports that 100 percent of Lefty’s medical bills were covered and says donations are no longer being accepted.

Despite the amputation, the vet says Lefty is doing “amazingly well,” and has already learned to get around as if “she has been a three-legged dog her entire life.”

Leatherbury describes Lefty’s temperament as “wonderful. She doesn’t appear to be aggressive in any way. She’s sweet,” but adds the dog’s bravery isn’t uncommon. “I think a lot of animals really bond with their owners. And Lefty’s owner feels like she saved his life.”

We’ve said it before and we’ll say it again. Pit bulls are great dogs if they are socialized and raised properly. The blanket fear of this breed simply is not justified. If you are a person who has previously owned a dog and understand the value of training, then this can be a great dog for your family.

An Alternative to Banning Pet Stores