At the request of the United States Attorney’s Office and the Federal Bureau of Investigation, the Humane Society and the American Society for the Prevention of Cruelty to Animals (ASPCA) has assisted in rescuing 367 pit bull dogs in what’s believed to be the second-largest dog fighting raid in American history. The raid was the result of a three-year investigation initiated by the Auburn, Alabama, police department. 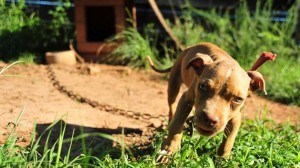 The ASPCA and HSUS participants oversaw the transport of the rescued dogs to temporary emergency shelters, where they were given veterinary care as well as behavior modification. The dogs ranged in age from newborns to older dogs at least 10 years old. Many of the dogs appeared malnourished and had scars from fighting.

Conditions at the raid locations were deplorable with filthy living areas, little or no water, and minimal shelter or shade.

HSUS chief executive officer Wayne Pacelle says, “We are committing to eradicating dog fighting in every dark corner where it festers. This series of raids reminds every dogfighter that they are not beyond the law and their day of reckoning will come.”

Matt Bershadker, ASPCA president and CEO notes, “We ended the torture of hundreds of abused and neglected dogs. Never again will these dogs be forced to fight, live in squalor, or be neglected and deprived of the bare necessities.”

United States Attorney George L. Beck, Jr. reported, “The number of dogs seized and the amount of money involved in this case shows how extensive this underworld of dog fighting is.”

All 50 states prosecute dog fighting as a felony. If the suspects are convicted as charged, they will face a maximum sentence of five years in prison, in addition to fines and restitution.