Researchers at University of Pennsylvania’s Working Dog Center are attempting to teach dogs to detect ovarian cancer through smell in hopes of detecting the disease at its earliest stages. In 7 out of 10 cases, the disease is not discovered until it has spread, making it the fifth deadliest type of cancer. But with early detecting, the survival rate is approximately 90 percent.

Researchers are using imprinting to train the dogs in scent detection. The time consuming process works by applying some of the target scent on a toy or some other familiar object and reward the dog when it locates the item in a container. They repeat the steps over and over, ever decreasing the size of the object and increasing the saturation of scent. Eventually, they stop using the object and just place a sample of the scent. If and when the dog seeks out the scent alone, it is ready to go into the field.

This process is how drug and bomb sniffing dogs are trained. Except now, researchers are hoping their team of cancer fighting canines will identify patients with early stage ovarian cancer tumors. The scent used in training is a chemical component obtained from cancerous ovarian plasma.

Bloodhounds have long been considered the scent-sniffing kings of the canine world, but researchers now suggest other breeds may also have an inherent nose for detecting. 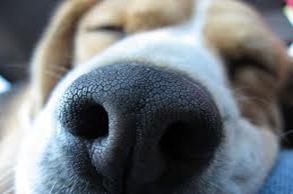 Cindy Otto, a researcher at the Penn Working Dog Center, explains, “The bloodhounds are trailing dogs, man-tracking dogs. But for what we call air-scenting, where the dog raises his nose in the air and tries to find the source of a smell, those tend to be the retrievers, the hunting dogs.”

The new research has precedent. In 2004, a team of British scientists discovered dogs were able to detect bladder cancer by sniffing a patient’s urine and sense when an epileptic is about to seizure.

Otto adds: “There are over 180 applications for dog detection. It’s so exciting to think about the opportunities.”