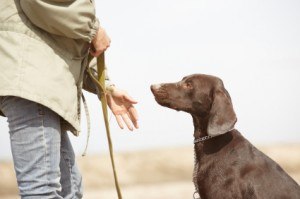 They say desperation is the mother of invention. In the case of Albuquerque, New Mexico, couple Rick and Heather Dillender, it was the start of their careers as dog trainers.

Around eight years ago, the Dillenders’ Border Collies were terrors that exhibited destructive aggression around the house. Unable to find any trainers to alter the dogs’ behaviors, they decided to tackle the training on their own. They started by studying other dogs to understand how excitement and improper behaviors begin and are unintentionally reinforced.

After trial and error with training tactics, they developed a system that encourages calm, focused, agreeable behavior.

In addition to correcting their bad behavior, they also trained their Collies to be service dogs. The pups are now able to alert Rick of an oncoming epilepsy seizure or warn Heather of a pending migraine. When Kita senses an approaching migraine, she pokes Heather with her nose. When an epileptic episode is approaching, Rick’s dog Jackson becomes agitated, alerting him.

Soon others were asking the Dillenders to train their dogs for service. Due to the demand, their training techniques turned into a career in 2008. While they still rehabilitate bad behavior, most of their time is spent training household pets or shelter animals as service dogs.

Rick explains that their background in behavior rehabilitation enables them to train household dogs from shelters. Their technique is unlike other systems where the trainer works with the service dog from the time they are puppies. Their proudest achievement is giving shelter dogs a second chance by offering them a structured outlet for their energy and intellect.

Families that have a hard time managing their dog’s bad behavior bring them to the Dillenders. Once those dogs are given something to do to, their behavior totally changes.

Teaching Your Puppy To Sit Using The Corner Strategy

There’s more to training than housebreaking

How to Potty Train a Puppy